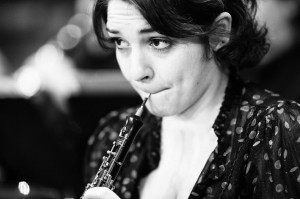 Melanie Rothman is currently a student of David Walter at the Conservatoire National Superieur de Musique de Paris. In 2011-2012 she studied with Nora Cismondi, principal oboist of the National Orchestre de France, at the Conservatoire National de le Region de Paris. In 2009-2010 she studied at the Royal Academy of Music in London, with Melanie Ragge, where she held the Parepa Rosa scholarship and was winner of the Leila Bull Oboe Prize, and the Nicolas Blake prize for chamber music.
She had the privilege of being principal oboe of the National Youth Orchestra of Great Britain in 2008 and 2009, working with conductors such as Antonio Pappano, Vasily Petrenko and Semyon Bychkov, playing live at the BBC Proms. Anna Picard of The Independent reviewed that “Melanie Rothman’s oboe solo revealed startlingly mature musicality” in a performance of Strauss’ Alpine Symphony in January 2009 at Symphony Hall Birmingham.

Orchestral performances in Paris in 2011 and 2012 have included a gala performance with mezzo-soprano Natalie Dessay at the Theatre du Chatelet, and Mahler’s monumental First Symphony at the Salle Pleyel.

In the UK, she was a woodwind finalist in the BBC Young Musician of the Year competition 2008 which was televised on BBC4.

In 2008 and 2009 she performed twice at the Wigmore Hall, London. This included Britten’s ‘Temporal Variations’ for oboe and piano and Elliott Carter’s Quartet for Flute, Oboe, ‘Cello and harpsichord.

In March 2009, Melanie performed a solo recital as part of the Leeds International Concert Season at The Venue, Leeds. She has also performed a chamber music recital at the annual convention of the British Double Reed Society with oboist Malcolm Messiter and bassoonist Roger Birnstingl in May 2009.

Melanie attended a masterclass course in August 2010 with Alexei Ogrintchouk, principal oboist of the Royal Concertgebouw orchestra, at the Académie musicale de Villecroze and in May 2012, with Maurice Bourgue, international soloist, at the Academie de La Chaise Dieu.

In February 2011, she took part in 10th season of the Symphony Orchestra of India as principal oboist.

Melanie is also an avid writer and has had a number of articles published in ‘Double Reed News’, the magazine of the British Double Reed Society.

Melanie plays on instruments made by Fossati, Paris.