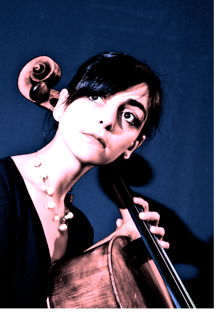 Classical musician, but also eager to foster and premiere works by composers of her generation, the cellist Marie Ythier can already boast two recordings, that include the one of the Denisov Duo (Meyer foundation, 2014), and is preparing a upcoming CD for cello solo and live electronics, featuring works exclusively written for her and dedicated to her (Evidence classics, Harmonia Mundi, November 2015). Trained at the Paris and Lyon conservatoires, she regularly performs in prestigious venues and festivals in France and abroad (Paris Philharmonie, Dijon Auditorium. Kuhmo Festival, FIMC Lima, Suona Francese/ Suona Italiano, the Messiaen festival, KKL Lucerne…). She often collaborates with English, Italian and German ensembles and has played as a soloist under the direction of renowned conductors, including Pierre Boulez and Peter Csaba. An enthusiastic pedagogue, she teaches at Paris’s 15th arrondissement conservatoire, is a guest teacher at National Superior Conservatoir of Lima (Peru) and gives master classes in Europe and Latin America. With her varied musical experience, Marie Ythier plays the repertoire of all musical periods both in chamber music and as a soloist.

1st prize of the cello competition of Zontas Clubs in 2008, Marie Ythier is a prize-winner of Adami in 2011, of Mécénat Musical Societé Générale in 2012, of the Meyer Foundation in 2013, and of Francis and Mica Salabert Foundation and of Foundation of France for 2015.